5, 3, and 1 points. Ten jury members per country could give points to their three favourite songs.

The Eurovision Song Contest 1965 was the 10th anniversary of the show, hosting in Naples, Italy, following Gigliola Cinquetti's victory the previous year.

This year, Luxembourg scored their second win with French singer France Gall. Belgium, Finland, Germany and Spain, however, ended up on the bottom of the scoreboard with empty hands for a second time, each scoring nothing from the jurors. The Swedish entry was performed in English this year. The United Kingdom finished 2nd yet again, already making their unbeaten second places a Eurovision record, which is still held by the country to this day.

Ireland made their debut in this year, finishing 6th. Little did anyone know at the time that this would be the country that will score the most wins, and having a hat trick of wins from 1992 to 1994. 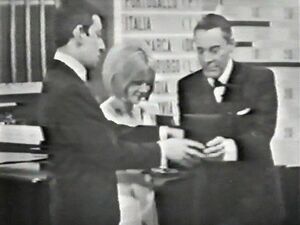 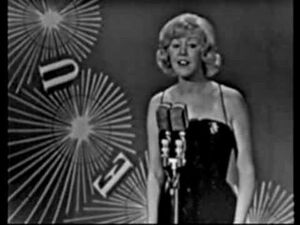 Kathy Kirby, 2nd place
Add a photo to this gallery

Retrieved from "https://eurosong-contest.fandom.com/wiki/Eurovision_Song_Contest_1965?oldid=34706"
Community content is available under CC-BY-SA unless otherwise noted.