5, 3, and 1 points - ten jury members per country could give points to their three favourite songs.

The Eurovision Song Contest 1964 was the 9th in the series, and was held in Tivolis Koncertsal in Copenhagen, Denmark. This was the first contest to be held in a Scandinavian country.[1]

Like 1956, there is no video recording of this contest, despite many people owning a television, but only stills, a short clip of the winner's reprise, and audio recordings of the contest remain. Rumour has it that the BBC once held visual recordings of the contest, but an empty tape canister marked 'Eurovision 1964' was found during a storage cleanup, presumably wiped for future programs (obviously).[2] No other broadcaster recorded the contest in its entirety other than the winner's reprise.[3] Segments of the contest exist in NDR's archives. DR, the host broadcaster, had a studio fire in the 1970s in which the tape was allegedly lost.

A few new surprises were introduced in this contest, that will follow on in the future; Portugal was the first country to score nul points on a debut, Anneke Grönloh (The Netherlands) was not of Dutch descent, but of Indonesian descent, and Los TNT was the first group with 3 or more members. Germany, SFR Yugoslavia and Switzerland all scored nul points for the first time, and Italy scored their first win of two so far. 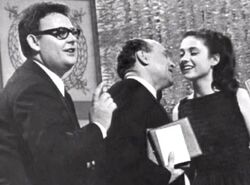 Rare image of the cameras used

The Interval act
Add a photo to this gallery

Retrieved from "https://eurosong-contest.fandom.com/wiki/Eurovision_Song_Contest_1964?oldid=28092"
Community content is available under CC-BY-SA unless otherwise noted.