The Eurovision Song Contest 1957 was the 2nd of the series, and was held on March 3, 1957 in Frankfurt-am-Main by the Hessischer Rundfunk on behalf of Deutsches Fernsehen ARD. It was won by the Netherlands with Net als toen, performed by Corry Brokken, a singer that participated the previous year, and will also do in the following year. Lys Assia, the inaugural winner, joined her in participating in the 1957 and 1958 contests.

Austria, Denmark and the United Kingdom all made their debut in this contest, joining the Founding Seven participating countries from the previous year. Despite the fact that an increasing number of people had access to a television, the contest was still mainly a radio programme.

Duo singers were now allowed into the contest, however, groups of three or over were not allowed until the 1970s when that rule was dropped to allow a maximum of six to the stage including backing singers and dancers, enabling groups such as Brotherhood of Man, Teach-In, and Dschinghis Khan to perform.

The Danish participants Birthe Wilke and Gustav Winckler caused controversy by doing rather a long kiss in their performance, Eurovision's first (and longest) on stage kiss. Furthermore, Nunzio Gallo's Corde della mia chitarra"remains to be the longest Eurovision song on record, due to a three-minute rule introduced the following year because of protests from the other contestants and their delegates. Also changing was the fact that there was a scoreboard in the room, and the Jury were present in the hall at voting with the new rule of voting for other countries besides their own.

For some time, a rumour had existed that the privilege of hosting the 1957 contest was given to Germany because they had come in second place in 1956 with Im Wartesaal zum großen Glück by Walter Andreas Schwarz. In fact, not only were the official 1956 scores withheld, but the rule stating that the winning nation hosts the next year's Eurovision Song Contest had not yet been conceived. It was planned at the time that each participating country would take it in turns to host the event. However, as more countries wanted to take part, this became impossible to do. 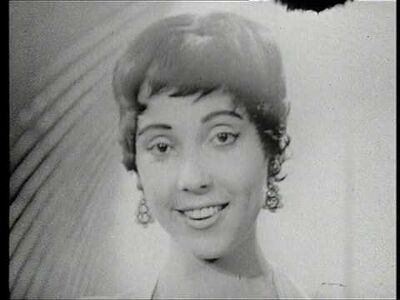 Corry Brokken, the winner of the evening. 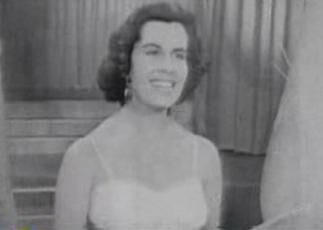 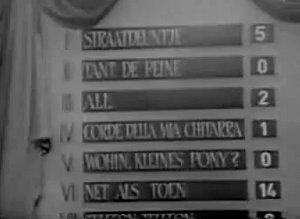 Part of the 1957 scoreboard
Add a photo to this gallery

Retrieved from "https://eurosong-contest.fandom.com/wiki/Eurovision_Song_Contest_1957?oldid=32320"
Community content is available under CC-BY-SA unless otherwise noted.