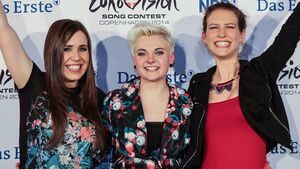 Elaiza is a German female folk-pop trio formed in 2013 and fronted by Polish-born Elżbieta "Ela" Steinmetz. Her background is reflected in the group's music.

The trio applied for the German selection via YouTube and won the right to participate in the national selection final as a wildcard after winning the televote at the Klubkonzert event with the song Is It Right?. They went on to win the German final, becoming the first wildcard entry to win the competition, earning them the honor to participate in the Eurovision Song Contest 2014 in Copenhagen. The girls finished in 18th place overall.

Around the same time, they released their debut album entitled Gallery.

On 5 August 2016, it was announced that Yvonne Grünwald had left the band to focus on a solo career and that Laura Zimmermann would take her place, bringing in violin to the band.[1]

Retrieved from "https://eurosong-contest.fandom.com/wiki/Elaiza?oldid=25996"
Community content is available under CC-BY-SA unless otherwise noted.