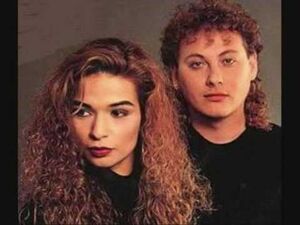 Orna Datz (nee Cohen) was crowned "Miss Holon" at seventeen years old and participated in the IDF band during her military service. In 1985, she was a backing vocalist for Yardena Arazi during Kdam Eurovision; however, the song was not selected.

Moshe Datz was born in Haifa to Polish immigrants, and sung in a children's choir. He participated at the Children's Song Festival in 1972 and later wrote a song for a volunteer group. He was an accompanist for Michal Tal at Kdam Eurovision in 1983 and performed in a number of groups.

The two met at the Hasidic Singers Festival in 1986, and got married in the following year. They participated in Kdam 1987 with the song Kupidon, which came fourth in the competition. Later, they released their debut album, which featured songs from Moshe's old band. Despite a number of songs becoming hits in Israel, the album didn't become much of a success. Their second album, however, received a gold certification.

They tried to represent Israel again with the song Kan; this time, they succeeded, and got the chance to represent the country at the Eurovision Song Contest 1991 in Rome. It placed third overall, only seven points behind the Swedish and French entries.

Their third album, The Glass Bell, was negatively received, though it had a number of hit songs. The following album was had more positive reception, and two more followed in the 1990s. In addition, Duo Datz composed a series of children's theme songs and albums. Moshe Datz also composed the Israeli entry for the Eurovision Song Contest 1995, Amen. Along with music, Orna Datz hosted a number of shows, along with Miss Israel 2005 and 2006.

In December 2006, Orna and Moshe divorced after twenty years; they had two sons together. One of them, Omer Datz, participated in the first season of HaKokhav HaBa (before it became the new Israeli selection format for Eurovision) and placed fifth.

Retrieved from "https://eurosong-contest.fandom.com/wiki/Duo_Datz?oldid=38728"
Community content is available under CC-BY-SA unless otherwise noted.