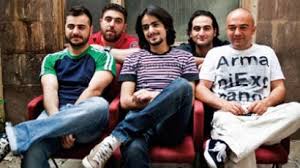 Dorians is an Armenian rock band founded in 2008. They released their debut album in 2011 through their own record label and have won several music awards in their homeland. They are dubbed "the Armenian Bon Jovi" by their fans.

They came to national recognition when they participated in the 2013 Contest in Malmö with the song Lonely Planet, which finished in 18th place.

Retrieved from "https://eurosong-contest.fandom.com/wiki/Dorians?oldid=28356"
Community content is available under CC-BY-SA unless otherwise noted.