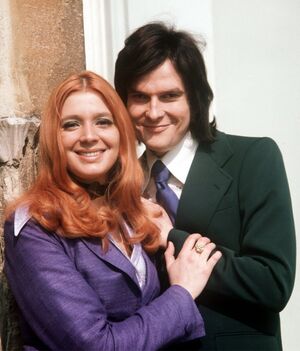 Cindy & Bert were a German schlager vocal duo who represented Germany in the Eurovision Song Contest 1974 in Brighton with the song Die Sommermelodie, finishing in 14th place (joint last).

Gusenberger and Berger started singing together in 1965, and were married in 1967. They signed a recording contract in 1969, with singles being regularly issued, notably "Der Hund von Baskerville", an unlikely cover version of Black Sabbath's "Paranoid" which has become a collector's curiosity. Their most successful period came between 1972 and 1975 when they placed eight singles on the German chart, including their biggest hit "Immer wieder Sonntags" which reached #3.

Their first attempt to represent Germany at Eurovision came in 1972, when "Geh' die Straße" finished in second place in the national selection. The following year they performed two songs in the final, but could only manage eighth and ninth place. The following year, they were finally chosen but unfortunately they placed joint last with Norway. Switzerland and Portugal.

Cindy & Bert divorced in 1988, with Cindy starting a solo career as Cindy Berger while Bert moved into production.

Retrieved from "https://eurosong-contest.fandom.com/wiki/Cindy_%26_Bert?oldid=28328"
Community content is available under CC-BY-SA unless otherwise noted.