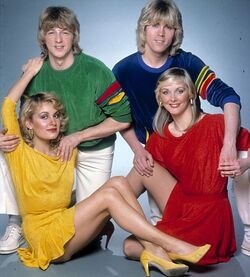 Making Your Mind Up

Bucks Fizz, currently known as OBF, is an English pop group, and like many other Eurovision bands and groups, they had a changing lineup. They were formed in January 1981, specifically for the contest in Dublin. They are most noted for their performance, having Nolan and G rip off the skirts off the female members, Aston and Baker.

Making Your Mind Up was the group's debut single and during the aftermath of the contest, it shot to No.1 in the UK charts. They also had varied successes in the UK and their worldwide record sales have exceeded 15 million.

-A three-member version who tour under the names of Baker, Aston and Nolan.

Retrieved from "https://eurosong-contest.fandom.com/wiki/Bucks_Fizz?oldid=22294"
Community content is available under CC-BY-SA unless otherwise noted.