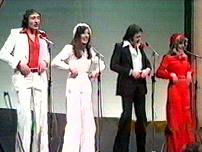 Save Your Kisses For Me

Brotherhood of Man are a four-piece group originating from the United Kingdom. Brotherhood of Man was started in 1969 by Tony Hiller, a songwriter and record producer, and the band, like Wind, frequently changed their line-up until 1973, where Martin Lee, Lee Sheriden, Nicky Stevens and Sandra Stevens (no relations to Nicky) made it definite.

This line-up scored many hits for Brotherhood of Man, including their 1976 winning entry Save Your Kisses For Me for their home country, the United Kingdom.

Retrieved from "https://eurosong-contest.fandom.com/wiki/Brotherhood_of_Man?oldid=31066"
Community content is available under CC-BY-SA unless otherwise noted.