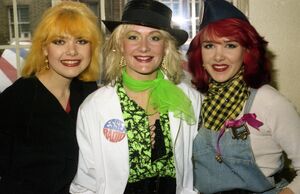 Belle & The Devotions was a British pop group who represented the United Kingdom in the Eurovision Song Contest 1984, performing the song Love Games.

Kit Rolfe had been involved in Eurovision before, as a backing singer for Sweet Dreams in Munich in 1983, when she herself was hidden off-camera. She performed the same task for Samantha Janus in 1991, teaming up with Hazell Dean to provide backing vocals in Rome.

Rolfe also later recorded a single with Eddie "The Eagle" Edwards, "Fly Eddie Fly". The song was not a hit.

Retrieved from "https://eurosong-contest.fandom.com/wiki/Belle_%26_The_Devotions?oldid=39148"
Community content is available under CC-BY-SA unless otherwise noted.