The country has just one top 10 finish, thanks to Dmitry Koldun who finished in 6th place in 2007 with the song Work Your Magic. Most of the time when failing to qualify, Belarus have placed 12th or 13th - just a bit short of qualifying.

Belarus, like Azerbaijan, has mostly been known to perform their songs in English. However, in 2017 the country sent a song for the first time sung entirely in the Belarusian language.

On 28 May 2021, the EBU announced that due to political unrest in the country, its stance against freedom of expression, the snubbing of its planned 2020 participants and the disqualification of its 2021 entry on political grounds, BTRC was suspended from the union and would not allow Belarus to participate in any Eurovision events as long as the suspension was in place.[1] 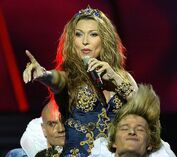 Zena
Add a photo to this gallery

Retrieved from "https://eurosong-contest.fandom.com/wiki/Belarus?oldid=45288"
Community content is available under CC-BY-SA unless otherwise noted.