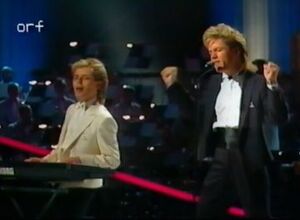 Bang was a Greek duo made up of Thanos Kalliris and Vasilis Dertilis. Many Eurovision fans have noticed an uncanny resemblance to the British duo Wham!

They represented Greece at the Eurovision Song Contest 1987 with the song Stop, finishing in the top 10 in 10th place. After the contest, the duo broke up in 1991 and Thanos embarked on a solo career.

Retrieved from "https://eurosong-contest.fandom.com/wiki/Bang?oldid=27467"
Community content is available under CC-BY-SA unless otherwise noted.