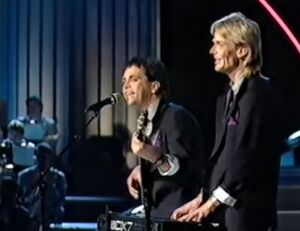 They teamed up with singer Anne-Cathrine Herdorf to represent Denmark at the Eurovision Song Contest 1987 with the song En lille melodi, which finished in joint fifth place.

Retrieved from "https://eurosong-contest.fandom.com/wiki/Bandjo?oldid=15801"
Community content is available under CC-BY-SA unless otherwise noted.