Situated in Central Europe, Austria is the country that has waited for the longest time between its two wins in 1966 and 2014. Before its first win in 1966 with Merci, Chérie, Austria placed last three times - the first time on its debut in 1957, the second in 1961 and the third in 1962, where the country went home with no points at all.

Although withdrawing from the 1969 Contest, Austria boycotted the four-way tie result of that year by refusing to take part in 1970. Throughout the rest of the 1970s and the 1980s, Austria has had mixed results, breaking through to the top ten on some occasions with songs such as Sonntag, and Hurricane. However, they placed last in 1979, 1984, and received their second Nul Points in 1988. 1991 saw their third Nul Points with Venedig im Regen.

Austria was relegated from participation twice, in 1998 and in 2001, due to having a low average points score. In the early semi-finals era, Austria qualified just once through automatic qualification (by being in the top 11 non-Big Four songs of 2003). The country withdrew from 2008, returning to the contest in 2011 achieving a top 20 position.

Austria's drought of bad luck ended in 2014, where Thomas Neuwirth, performing as Conchita Wurst, took to the stage with Rise Like a Phoenix, scoring 290 points and winning both the semi-final and the final. However, despite their success, the country was given Nul Points (along with Germany) for the fourth time in 2015. 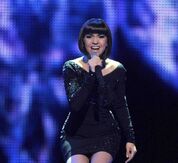 Paenda
Add a photo to this gallery

Retrieved from "https://eurosong-contest.fandom.com/wiki/Austria?oldid=41341"
Community content is available under CC-BY-SA unless otherwise noted.