Albania made their debut at the Eurovision Song Contest 2004 in Istanbul, with Anjeza Shahini performing The Image of You. The country placed inside the top 12 non-Big Four entries that year, meaning auto-qualification for the 2005 Contest. They have participated in every contest since their debut.

The country failed to qualify in both 2006 and 2007, but Olta Boka brought them back into the final in 2008. In 2012, Albania was represented by Rona Nishliu, and not only winning the Barbara Dex Award of that year, she placed Albania inside the top five - giving them their best placing to date.

Albania's worst placing was in 2014, with Hersiana Matmuja performing One Night's Anger.

The country has sent songs in Albanian and English, although more recently has chosen to translate their songs into English in time for the contest. The Albanian National Selection requires songs to be performed in Albanian. However, non-qualifications in 2016 and 2017 resulted in a switch back to Albanian for the 2018 contest, where they qualified for the final and finished 11th. 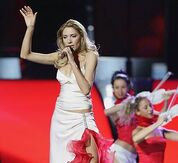 Jonida Maliqi
Add a photo to this gallery

Retrieved from "https://eurosong-contest.fandom.com/wiki/Albania?oldid=41046"
Community content is available under CC-BY-SA unless otherwise noted.