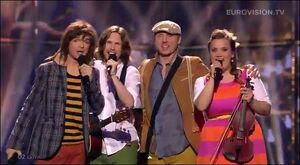 Aarzemnieki are a German-Latvian band whose name translates to "the foreigners".

They represented their home country in the Eurovision Song Contest 2014 in Copenhagen with their song Cake to Bake but did not make it out of the first semi final along with five other countries' entries, marking the sixth consecutive year that the country would miss out on the final.

Member Katrīna Dimanta made the finals of Supernova 2020 with the song "Heart Beats".

Retrieved from "https://eurosong-contest.fandom.com/wiki/Aarzemnieki?oldid=39427"
Community content is available under CC-BY-SA unless otherwise noted.